Welcome to Dakota Fanning Network your best source for everything Dakota Fanning. Here you can find the latest news, photos, multimedia and all that you want to know about her. Please, enjoy your visit and come back soon!
Staff • February 24th, 2012   0 comments

More new photos of Dakota Fanning have been added to the gallery so, you can go there to take a look and enjoy!

Yesterday was Dakota Fanning‘s 18th birthday and I would like to wish her the best.

To celebrate this, I added some new photos of Dakota Fanning to the gallery so, you can go there to take a look and enjoy! More new photos are coming in a few minutes.

Hello everyone!!! I am so happy to announce that Dakota Fanning Network has a new layout thanks to the beautiful Tathy. I really love this!! This is one of my faves shoots and I love the new style too, what do you think? If you find errors or do you have suggestions… please, let me know. Every comment will be appreciated! 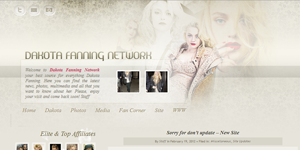 Hello there! First of all, I am so sorry for don’t update the site before. I got tons of photos to upload but I haven’t enough time with my personal life and with a new project.

I was working so hard to get a new site about Elle Fanning and I would like to share this with you all. You can go to Elle Fanning Fan and enjoy the site! 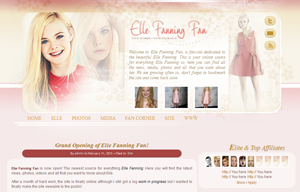 More new photos of Dakota Fanning are coming so, come back later to take a look to the updates.

Dakota Fanning is in negotiations to star in ‘Very Good Girls’.

The ‘Secret Life of Bees’ actress could star alongside Anton Yelchin and Elizabeth Olson in the directorial debut of Naomi Foner.

The film tells the tale of two girls who have been best friends for life but decide they want to lose their virginity before they graduate high school.

Their relationship sours when they both fall for the same boy.

Commenting on the script, Naomi said: “The film deals with female sexuality and friendship in a way we haven’t seen before. These girls will be stunning young girls in a couple of years, but they’ve struggled through high school with only each other. Most of us have been there.

“This is the summer where they finally get to touch real life.”

‘Very Good Girls’ is set to shoot in New York City in June.

Dakota will next be seen in ‘Now Is Good’ and also have ‘The Twilight Saga: Breaking Dawn – Part 2’ due out later this year . [Source]

Dakota Fanning will never compete with her sister

Dakota Fanning is proud of her younger sister Elle, who has just followed in her footsteps by launching an acting career, and she insists the pair will never compete for roles.

Dakota Fanning will never compete with her actress sister.

The 17-year-old star’s younger sister Elle, 13, has now also established her own film career but the elder sibling insists they will never be screen rivals.

She said: “We see ourselves as two completely different entities. It won’t really affect us because … I mean, we don’t even look alike.”

Dakota describes herself as a “sensible, logical person” and admits she admires Elle’s more care-free attitude to life.

‘The Runaways’ star added to the new UK issue of Elle magazine: “She is incredibly free-spirited and totally wears her heart on her sleeve, you know exactly what she is thinking by taking one look at her.

“She’s just incredibly … I don’t know, I wish I could be more like her sometimes.”

Despite insisting they are not rivals, Dakota admits it has been strange to see Elle working so hard while she has been relaxing at home.

She said: “Usually it’s her sitting in pyjamas waving goodbye as I go off some place but this last year it’s been me at home by myself in sweatpants saying, ‘Bye Elle’ as she goes off somewhere all dressed up.” [Source]

I added a new video of Dakota Fanning to the Multimedia Zone so, you can go there to watch this online, comment or download this. Enjoy!

Dakota Fanning Network wants to wish you Happy New Year! 2011 was not a good year for me. I got some personal problems and economy problems too. But I am not going to leave the site because I love this. I am planning big things with the site and for this, I am going to ask for your help. I want to spend some money buying photoshoots, magazines, photos and everything to make the site better and share with you all, so, if you want to donate some money, please… Every little bit helps! Any help will be more than appreciated.

Thanks to everyone who is visiting and supporting the site everyday. I love you all.

I want to wish you all Happy Christmas! I hope you all have a great time with your family and friends, with lot of love and joy in your life. Thanks for the support to the site and for make me happy here. I hope to see all soon here to read awesome news and take a look to the updates.

Enjoy holidays and be happy!!!!

Some new photos of Dakota Fanning have been added to the gallery so, you can go there to take a look and enjoy!

The First Lady (2021)
In the East Wing of the White House, many of history's most impactful and world-changing decisions have been hidden from view, made by America's charismatic, complex and dynamic first ladies.
News:Photos:IMDB

The Bell Jar (202?)
A young woman finds her life spiraling out of control as she struggles with mental illness.
News:Photos:IMDB
Partners

Visit our photo gallery with over 41.300 photos and growning often!
Link Us

I am in no way affiliated or connected with Dakota Fanning, and this site is in no way official. This is just a fansite, created by a fan. I don't know anything about her personal life except what is on this site. Everything on this site is ©2010-2021 Anne unless other is noted. Do not remove anything without permission. No copyright infringement is ever intended.